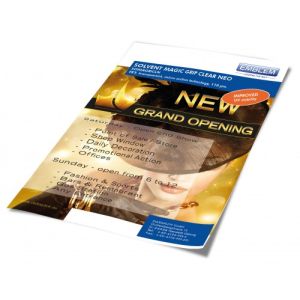 EMBLEM Solvent Magic Grip Clear Neo, based on a transparent polyester film with a glossy coating, is made for printing with common eco solvent-, solvent-, UVC- and latexbased inks. Objects behind the film are not blurred because of its clearness. Innovative micro suction technology enables EMBLEM Solvent Magic Grip Clear Neo to adhere on smooth surfaces. It has a better UV stability because of an improved adhesive layer. With the thinner film it is easier to apply. You can still remove the film without residue.
The film adheres only on smooth flat or cylindrical surfaces like windows.
Typical indoor-applications are short term promotions, shop window advertising and interior
design.